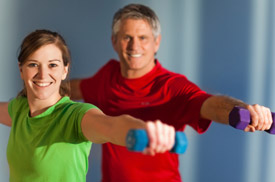 How body size and type relate to diabetes management

Diabetes is a metabolic disorder resulting from defective insulin secretion, insulin action or both. Consequently, people with diabetes have chronically elevated plasma glucose levels and disturbances in metabolism that lead to further complications. Type 2 diabetes mellitus, which accounts for about 83% of all diagnosed cases of diabetes, is characterized by a long period of hyperglycemia (abnormally high concentration of glucose in blood) and may last for a year before symptoms begin. The goal, therefore, is to achieve and maintain appropriate plasma glucose levels in order to manage diabetes, which is done with a combination of medication, dietary intervention and aerobic exercise.

In monitoring long-term plasma glucose levels, glycosylated hemoglobin (HbA1c) is considered the gold standard, and diabetic interventions seek to achieve HbA1c levels of less than 7% to reduce complications. One result of compromised glycemic control in diabetics is muscle weakness, decreased muscle mass and changes in skeletal muscle fibers, but studies performed on animals show that resistance exercise can increase muscle mass. Since skeletal muscle is a large reservoir for glucose disposal in the body and exercise stimulates glucose uptake, its possible that resistance exercise can help type 2 diabetics manage their condition. To determine if progressive resistance exercise improves glycemic control in type 2 diabetics more than no exercise or aerobic exercise, and if it also improves strength and body composition, a large systematic review of other studies was conducted.

Scouring the vaults for relevant information

Study conductors searched through medical databases and screened for trials pertinent to the review using a very specific inclusion criteria. Only trials focused on patients with type 2 diabetes who engaged in progressive resistance training for more than eight weeks compared to a control group were used. Worthy trials were then assessed for quality and variables such as patients' age, body mass index (BMI) and baseline percent HbA1c levels were recorded, and groups were categorized accordingly. The primary outcome sought from of all trials, naturally, was glycemic control as measured by percent HbA1c, while secondary outcomes included body composition and strength. A total of 449 studies were found, but after the inclusion criteria were applied, only nine studies actually fit the exact specifications needed. The nine studies consisted of 372 participants, the majority of whom were overweight or obese, and 192 who engaged in progressive resistance exercise. Training sessions, which in most cases occurred three days a week, consisted of exercises with free weights, exercise machines, or elastic bands with the ultimate goal of strengthening muscles.

The study findings showed that progressive resistance training lowered HbA1c by a small but significant amount when compared to the non-exercise group, while not much of a difference was noted between it and the aerobic exercise group. The resistance group also showed large, significant improvements in muscle strength when compared to both the non-exercise and control groups, while no effects were noted in body composition for either group. While the decrease in HbA1c resulting from the resistance exercise group was seemingly small at only 0.3 percent, the effects are much greater, as a 1 percent decrease in HbA1c is associated with a 37 percent decrease in the risk for microvascular complications and a 21 percent decrease in the risk of death caused by diabetes. To give more validity to the findings, another perspective shows that the resistance group here made a 55percent improvement towards the target of 7 percent for HbA1c.

As mentioned, diabetes-related therapy usually consists of medication, diet and exercise. Hypoglycemic medication can reduce HbA1c by 0.5-2 percent, but is extremely expensive, can cause side effects and its efficacy eventually declines. When executed properly, dietary management can also lower HbA1c by 0.43-1 percent. Finally, per this study, progressive resistance training alone won't produce major results, but when used in conjunction with medication and proper dietary management, can yield significant reductions in diabetes-associated complications. Furthermore, progressive resistance training is considered to be safer and more feasible than aerobic training, it doesn't require participation every day, and builds more muscle. Ideally, though, a combined exercise program that features both aerobics and progressive resistance training would be most beneficial for type 2 diabetics, since they both have unique advantages. More research is require to delve deeper into these findings and to establish the best possible combined exercise program, but its clear that progressive resistance exercise is a safe, feasible pursuit that can greatly improve the lives of type 2 diabetics.